A Future without Violence Against Children in the Middle East

Speaking during the recent Global Network of Religions for Children (GNRC) Middle East Regional Meeting, Rev. Fred Nyabera, Director, Arigatou International—End Child Poverty, emphasised the need to eradicate child poverty so violence against children can be successfully eliminated. This, he said, was possible in region, given the endless opportunities proffered by faith communities. Rev. Nyabera pointed out that religious traditions have established many social networks and assets to fight against child violence and poverty. Community mosques, churches, temples, and shrines are focal social structures located in virtually every village, district and city, he stated. Moreover, “caring and empathy, attitudes embedded across most religious traditions, serve as powerful tools in addressing violence against children and child poverty,” Rev. Nyabera affirmed. 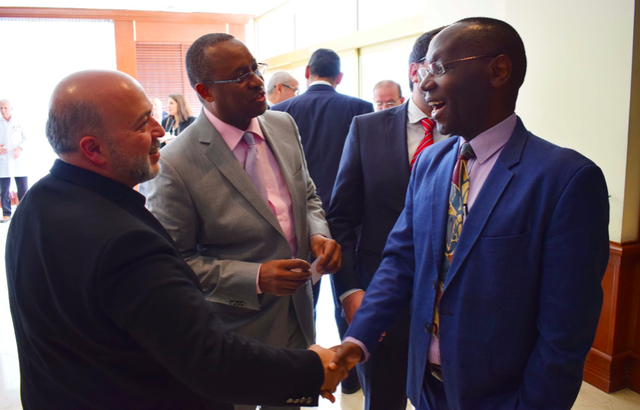 The Secretary General of the GNRC, Dr. Mustafa Y. Ali, also speaking during the same meeting, asserted, “Adults cause wars, not children. It is our responsibility to show children an alternative to violence, and that is peace and sustainable development for all.” While underscoring the important role of religion and faith leaders in ending violence against children and child poverty, Dr. Mustafa cautioned that religion is at times misused. In this regard, he advised, “we must know that children inherit what we give them or what they see. If they see negative or violent items then they remain tarnished in life”.

Sharing in the same thought, HRH Prince El Hassan bin Talal, Chairman of the Royal Institute for Interfaith Studies, questioned, “What will we tell our children in future when we will be unable to end violence inflicted on them when they were young?” He observed that the emergence of violence across the world calls for religious leaders and humanitarian systems to recognise human values and dignity. “We can address violence against children in the Middle East when we work together to implement action and policies that eradicate the violence in the region,” he stated. HRH Prince El Hassan further assured that Jordan was ready to work with all stakeholders of the community in preventing violence against children and also welcomes constructive ideas that can shape the world as a whole.

“What will we tell our children in future when we will be unable to end violence inflicted on them when they were young?”

The GNRC Middle East Regional Meeting was held in Amman, Jordan, 23 – 24 April 2019, under the theme, “Ending Violence Against Children: Role of Faith Communities in the Middle East.” It was organised by Arigatou International—GNRC in collaboration with the Royal Institute for Inter-Faith Studies (RIIFS) and the Arab Woman and Child for Training and Development (AWCO), a member of the GNRC Jordan.

The meeting sought to reflect on the state of children in the Middle East, in relation to different forms of violence they face, and the nexus of such violence to child poverty. It further explored possible action by faith communities, with close reference to the global Commitments to end violence against children, made during the GNRC 5th Forum in Panama, 2018. It concluded that investing in the capacities of faith communities to respond to child poverty and violence against children in the Middle East, would indeed produce tremendous positive results for all children.