Creating Safe Spaces for Children; The role of Religious Leaders. 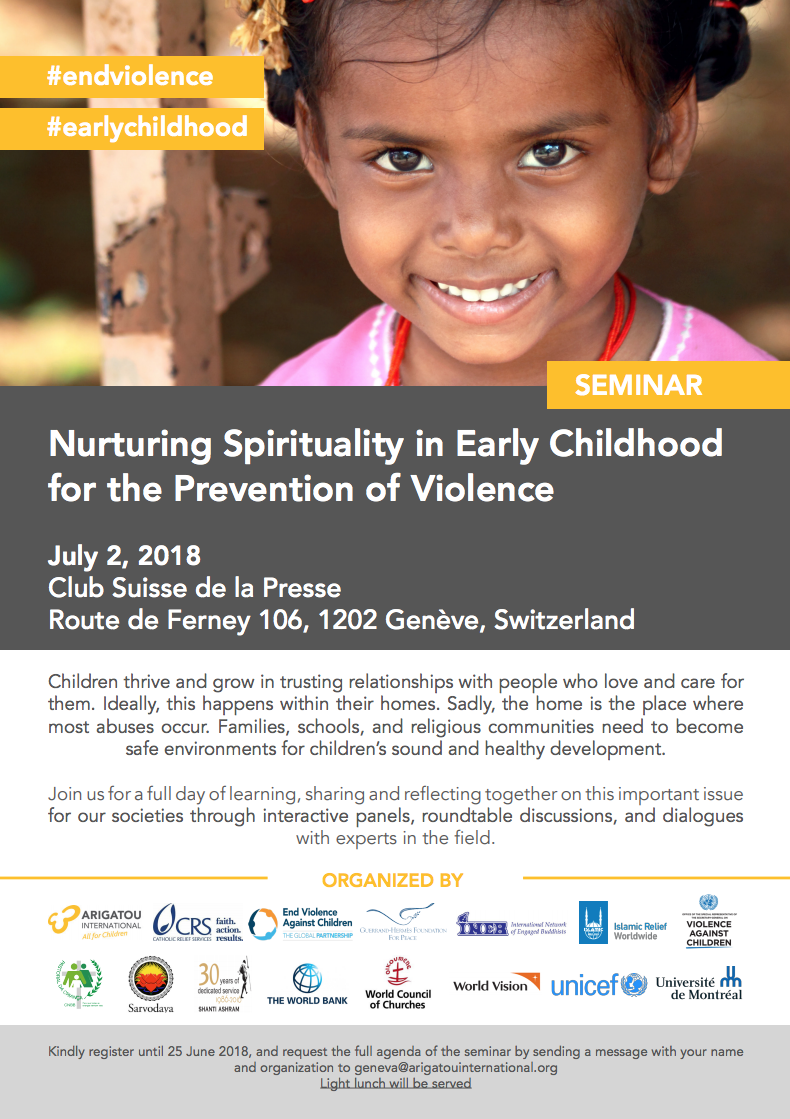 The first consortium seminar for the Strengthening Families to Nurture Values and Spirituality in Early Childhood; working together with faith communities, took place from 2 to 4 July 2018 in Geneva, Switzerland hosted by Arigatou International’s – Ethics Education initiative.

The seminar, brought together leaders from faith communities, World Bank, UN and scholars emphasizing on the fact that religious leaders can play a critical role in helping to create safe environments for children, challenging social and cultural norms that justify violence against children, and self-examining their own theological interpretations that can influence the upbringing of the child and their identity formation.

While it is widely recognized that religion helps create a safe environment for children, it is also true that religion as well as some cultural norms can be a source of exclusion and promotion of violence against children. This was echoed by Dr. Rashid Omar as he moderated on sharing about the role of religious leaders in nurturing spirituality in children and challenging norms that justify violence. The same sentiments were echoed by Rev. Fred Nyabera during his presentation while reflecting on the religious practices and cultural norms that can help end child violence.

“Religion and spirituality have a positive impact on the wellbeing of children during childhood and adolescent” said Dr. Ilham Nasser during her presentation on evidence during the seminar.

The consortium is cognizant of the fact that the family is the most important place where children and youth learn the foundations of respect, empathy, solidarity, and to trust one another. In early childhood, children learn not only physical and cognitive skills, but also social and emotional skills, such as sharing, resolving conflict without violence, managing their own emotions, and their ability to form and maintain respectful relations with others, which are the foundations for learning and well-being, hence the theme ‘Strengthening Families to Foster Ethical Values and Nurture Spirituality in Early Childhood’.

Being well positioned to support families and caregivers in the creation of family environments free of violence, and the use of parenting practices that are conducive to the healthy development of the child, religious leaders were encouraged to support fostering values such as non-violence, empathy, respect and compassion towards others in children.

Undeniably, strengthening families gives them a good opportunity to have a good environment for the early growth of children in which they are taught the right values and their dignity upheld. Therefore, growing up, children become empowered against acts of violence or even engaging in violence themselves thus creating a world free of child violence and poverty.