We are all here because we want a peaceful continent stated Shk. Ibrahim Lethome, the Secretary General of the Centre for Sustainable Conflict Resolution (CSCR). And it is important to appreciate the African continent by trying to change the negative rhetoric regarding the continent. He identified poverty, corruption, culture of violence as some of the threats to peace.

“We cannot talk about peace without taking steps to make sure that there is a peaceful environment and atmosphere. Everyone loves life, and if our premise is that we love life, what motivates others to want to destroy their lives and the lives of others?”

Radicalization is a process which is influenced by political, social and religious reasons. Radical groups reject the common ideas held by the masses and try to impose their ideas and belief systems on others. Radical ideas in themselves are not harmful, but they become a problem when radicals engage in violence through direct action to promote their political, social or religious agenda,noted Shk. Ibrahim Lethome.

Radicalization is not limited to any particular community, political party, religion or individuals. Radicalization is a fluid,nonlinear, highly individualized and very unpredictable process. This explains why it is very difficult to determine whether an individual in certain circumstances, relationships, dispositions and ideas will embrace violent extremism. 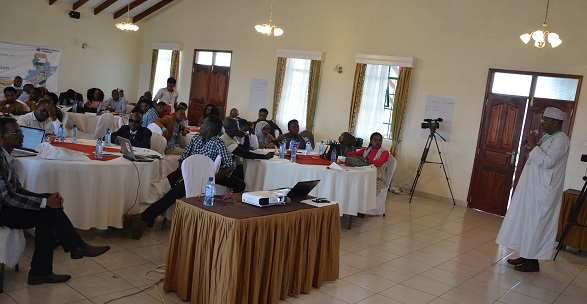 Shk. Lethome identified inter-religious, intra-religious and inter-ethnic tensions/mistrust, as well as loss of confidence in security agencies as indicators of radicalization. As such, it is important to identify the drivers of radicalization so as to understand the root causes, nature and magnitude, develop effective CVE strategies and identify relevant CVE partners.

The drivers/root causes of radicalization into violent extremisms can be divided into pull and push factors. The push factors are the negative environment and circumstances that would push an individual into taking a radical position. These could be social, cultural, political and economic factors. Push factors can also involve societal and environmental factors that aid in pushing vulnerable individuals into the path of violent extremism. These factors may include poverty, unemployment, discrimination (real or imagined), marginalization (real or imagined), harassment by security forces, decay of moral values, bad governance, corruption, profiling, historical injustices, violation of human rights, and insensitive response to terror incidences. It is important to note that these factors are not in anyway justifying violent extremisms as there is nothing which can justify an individual committing violent acts.

Pull factors on the other hand may include other group’s ideologies, prospects of changing one’s condition through violence (whether materially or spiritually), strong bonds of brotherhood and sense of belonging, reputation building, prospects of fame or glory, and other socialization benefits. Religion is the main pull factor into violence extremism in the Horn of Africa because religion has been used as a tool by extremist groups have used religion as a tool to manipulate and recruit young people into joining terrorists organizations. The misuse of religious texts has greatly contributed to inflaming radical ideologies. The use of religion for radicalization has been successful because believers have not been able to fully understand the fundamental values of their religions. However, the pull factors on their own cannot drive radicalization but rather an interplay between the push and pull factors. When these factors are brought together then an individual is susceptible to radical ideologies.